It looks like Too Hot To Handle's Francesca Farago is dating Towie's Demi Sims.

The pair have been gushing over each other on social media.

Speculation began when Demi shared a bikini snap on Instagram over the weekend.

Francesca, clearly stunned by the Towie stars beauty, commented, 'don’t do this to meeee'

That's fine, we thought. They could just be good friends.

But then the comments became flirtier, with Francesca writing, 'i’m so lucky,' under Demi's latest post.

The UK reality star has also been posting some flirty comments under Francesca's posts.

On a bikini picture of the Too Hot To Handle star, Demi wrote, 'That’s my perfect baby sloth'

Francesca not only pinned the comment to the top of the page, but she also replied, 'can we cuddle' 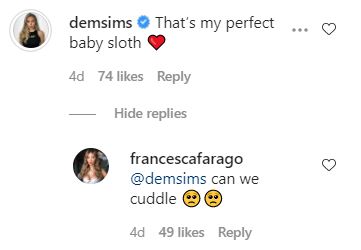 They've even taken their flirting to TikTok.

Demi used Beyonce's Dangerously In Love to express in a TikTok how she feels when the person she fancies calls her, "baby."

I mean... the evidence is pretty compelling but maybe they're just friends?