Hailey knows she has nothing to worry about.

Justin and Hailey Bieber married without a prenup in a New York courthouse over one year ago.

The marraige came just six months after Justin had broke-up with long-term on-off girlfriend, Selena Gomez for the last time.

The news of the quick engagement threw the Look At Her Now singer off guard, leaving her feeling "super overwhelmed".

But one year on, and another wedding under their belt this year, Hailey ensures that there is no feud between Selena and herself.

Her husband makes her "feel very confident about their relationship".

Earlier this year, Justin Bieber had to shut down claims that he only married the model to get back at Selena.

But the Biebs is most definitely head over 'heels in love' with his wife.

Looks like the happy couple have even talked about having children very soon!

Happy birthday babes! You make me want to be better everyday! The way you live you life is so attractive.. ps you turn me on in every way 😍😍😍😍 next season BABIES

Most recently however, the model posted a snap of Summer Walker's song I'll Kill You on her Instagram stories, following the release of Selena's single Lose You To Love Me. 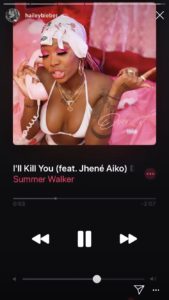 The story led fans to think Hailey's post was an indirect to the singer, after it was revealed that the song was about her relationship with Justin Bieber.

According to Cosmopolitan, Hailey was quick to shut down the shade accusation, pleading Selenators to "please stop with this nonsense...there is no ‘response.’ This is complete BS."

A source has said that Miss Bieber has been "liking photos of Selena, whether it be a glam shot or ones that her friends post on Instagram" to prove that there is no tension between the two in a "low-key but public" way.

Turns out Hailey has been a big fan of Selena, even when Gomez was dating Bieber.