Justin Bieber is 'head over heels in love' with his wife

Justin Bieber is fed up with social media users slamming his marriage.

Many believe he only married Hailey to get back at his ex girlfriend Selena Gomez.

So, Justin lashed back in a lengthy rant on Instagram.

It all kicked off when a follower commented on one of his Instagram posts.

'You are NOT in love with Hailey! You only married her to get back at SG...'

'Plus Hailey sleeps with men like @shawnmendes for fame and she's racist...'

The Bieb's couldn't sit back and allow someone speak badly of his wife.

He responds, 'Ur immature the fact that you have an account dedicated to dissing my wife and I is absolutely absurd...'

'Why would I dedicate my whole life to someone in marriage to get back at my ex...'

'Anyone who believes this is mean spirited or 10 years old or younger...'

'U should be ashamed to yourself really.'

He admits he still loves Selena

'She will always hold a place in my heart, but I am head over heels in love with my wife.'

'She is absolutely the BEST THING that has ever happened to me period.'

Bieber says this response is for, 'all immature sick people who send Hailey hurtful messages.'

'YOU HAVE NO IDEA MY LIFE AND WHats good for me!!'

'Hailey is my Bride period if you don't like that or support that means you don't support me.'

He accuses those who don't support him of not being a true fan.

'If you were raised right your parents would have said if you don't have something nice to say don't say anything.'

Justin shared a screenshot of his response on his Instagram Story.

The Bieb's asks his followers to screenshot and repost it everywhere. 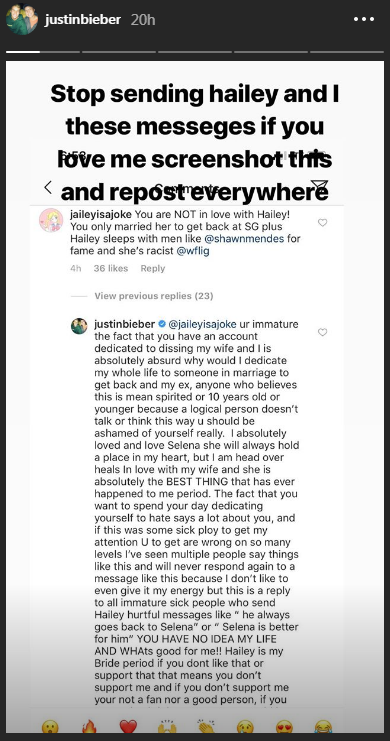 Hailey has just opened up about how some social media users frustrate her.

She said she gets 'frustrated' by 'possessive' fans in an interview with Cosmopolitan last week.

In the interview she spoke about receiving pretty nasty comments on her social media accounts.

She said doesn't understand why people think they know celebrities on a personal level.

'Kids become possessive over people and feel like if they think they're hurt, they feel hurt for them...'

Hailey continued, 'That’s what gets me, I think, the most frustrated.'

'You actually don’t know me.'

'What’s really weird to me is they create scenarios in their head of what they think is happening...'

The newly wed finished up, 'Or what they think should happen, and I’m just like, ‘This is just so dumb. It’s so dumb.’'

In other exciting news, Justin has just confirmed he will release a new album, 'ASAP.'