A futuristic London where the sky is filled with drones, everyone has a tiny computer attached to their heads, and the cars drive themselves might sound like a good thing, but the London of Watch Dogs: Legion isn’t exactly a sci-fi paradise.

London (and presumably the rest of Britain, but it’s never clearly stated) has fallen under the control of a private military contractor named Albion, while a crime family named Clan Kelley runs riot unopposed, and an evil hacker group called Zero Day seems to be behind London’s downfall.

Following the events from Watch Dogs 2, your hacker group DeadSec are liked and respected around the world as a sort of hero group to the corruption in the world. This changes rapidly however, after a string of terrorist bombings across London is blamed on DeadSec. This is where you come in to clear DeadSec’s name and to find out who really organised the attack on London. How you do that is by recruiting and using practically any character in the game (apart from story or enemy characters of course).

This is where Legion both excels and stumbles in equal measure, as on one hand, the vast choice of characters to choose from is exciting, but it poses other problems, mainly with the voice acting and connection to the story.

I picked an ‘Internet Celebrity’ named Chris as my first operative because he looked cool and came with a superbike as his personal vehicle, which I figured would be handy to have. I then went on a Pokémon-like spree of recruiting characters to build out my roster.

Each character has a different background with funny and interesting titbits about them, but what you’re really looking for are their perks and flaws.
You might recruit a sneaky Spy who has a silenced pistol and a car that shoots rockets, but he has hiccups, so enemies hear him while he’s sneaking around, making him not quite the James Bond you wished for. 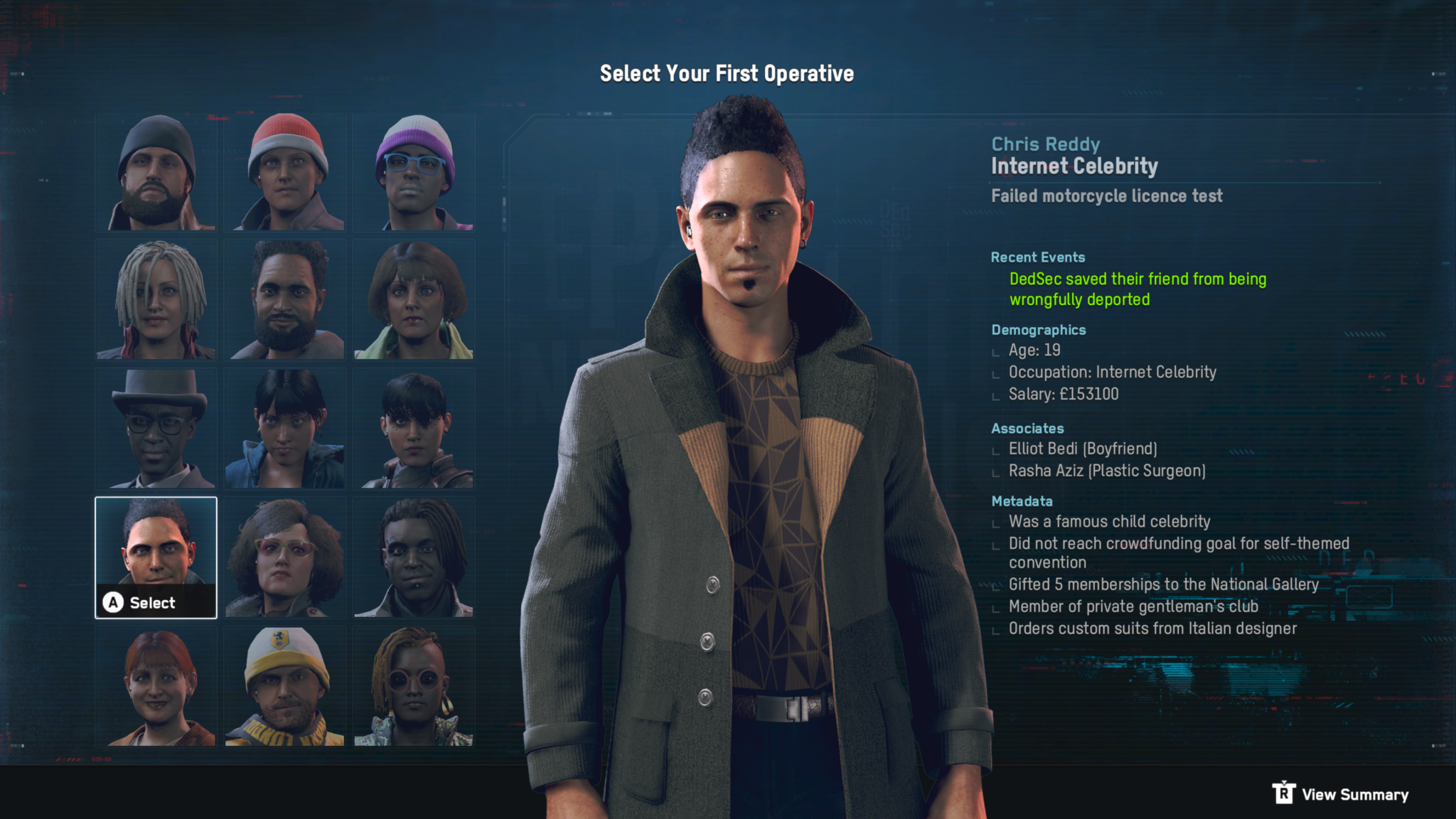 This leads you to choose favourites of course, and some Operatives are inherently more useful than others.
Construction workers are surprisingly one of the best Operatives to recruit, as they can summon a cargo drone at will which you can use to fly up on to rooftops and get the jump on security, and also allows them to access restricted construction sites without being detected immediately.

One of my favourite Operatives was an Albion Soldier named Paul, and because he was Albion the mission to recruit him was a bit more complicated than it would normally be – anyone who dislikes DeadSec will be less likely to want to join.

Because he was an Albion employee, he was able to walk right into any Albion base or building, and once he didn’t get too close to a guard or run around, they thought he was one of them. This made missions against Albion almost too easy, to be honest, and the same applies for hiring a Police Officer or a Clan Kelley gang member. 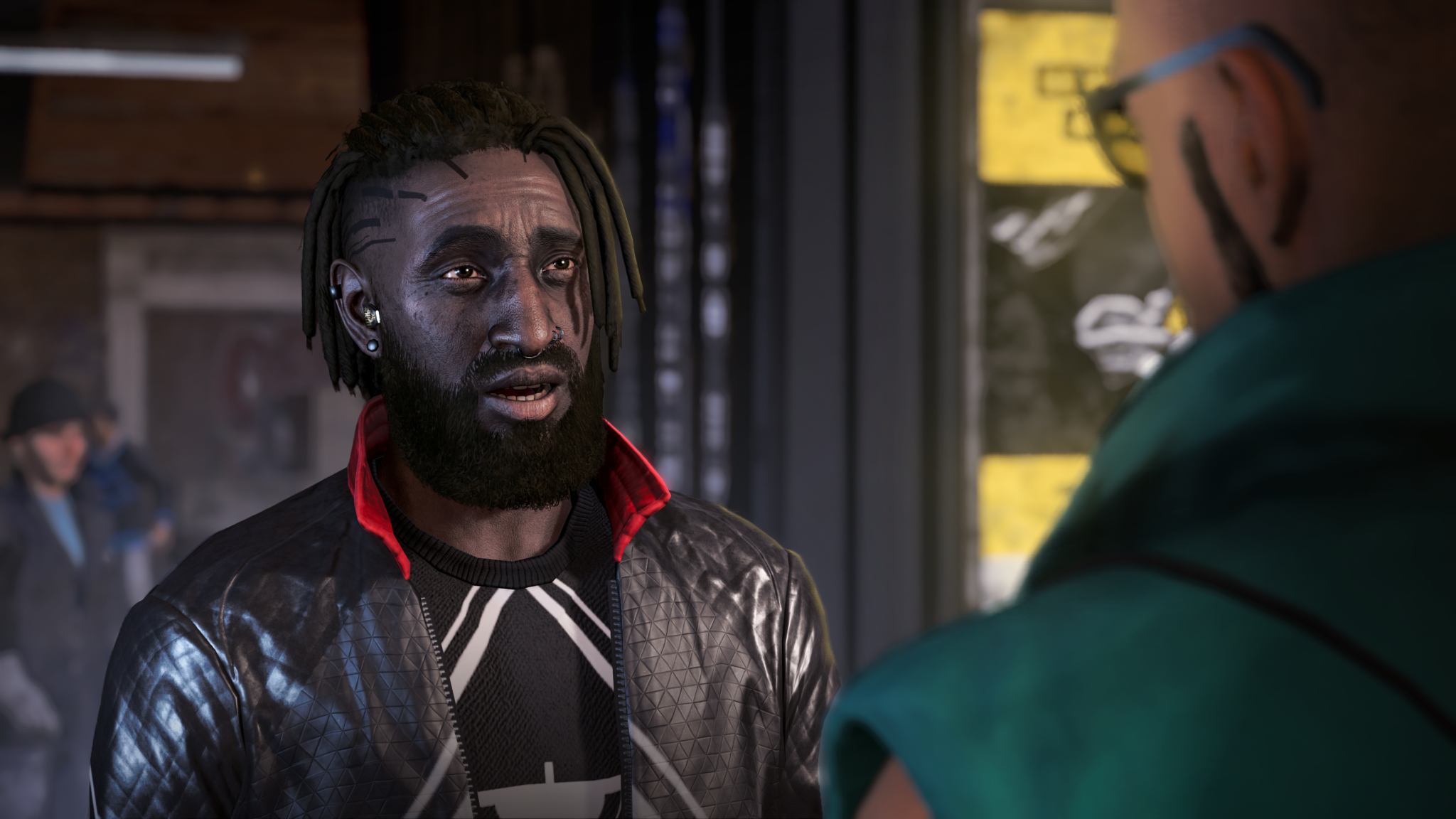 I’m a huge XCOM fan and so when I discovered Legion had a Permadeath mode, I couldn’t resist turning it and the Hard difficulty on (maybe I like the misery).
This improved my enjoyment of the game immensely, as I couldn’t just run in carelessly every mission, if my Operative died, they were gone forever, and if they all died, it was literally game over.

This came back to bite me when I got cocky in the latter half of the game with my favourite Operative Paul, and he was gunned down by his fellow Albion soldiers – my carelessness losing him made the rest of the Albion missions harder, as I couldn’t just walk right in anymore.

These kind of organic attachments to characters are the best thing about the “anyone can be a main character” system in Legion, and again, if you are playing with Permadeath, you genuinely care about them – especially as you can and will meet and recruit their wives, friends, parents etc.

The downfall of this system is while you may become attached to a character because of their stats or perks, not having a “main” character to anchor the plot to does harm the story, especially when it comes to the voice acting. Ubisoft can only be expected to hire so many voice actors to cover every single character in the world which is fair, but when two or three of your Operatives end up speaking with the exact same voice, or you hear the same voice on the street over and over again, it breaks the immersion.

This also extends to the lip-syncing which is woeful. Again, when every single character in the game could be the main character, it’s impossible for every facial animation to be done with full-on motion capture, but sadly the woeful lip-syncing mixed with the mediocre voice acting really makes cut-scenes cringe to watch.

Unfortunately, even the “main” characters don’t have the best performances, they’re all fairly bland and forgettable, apart from the AI Bagley who is genuinely really funny and single-handedly saves the story from being unbearable. 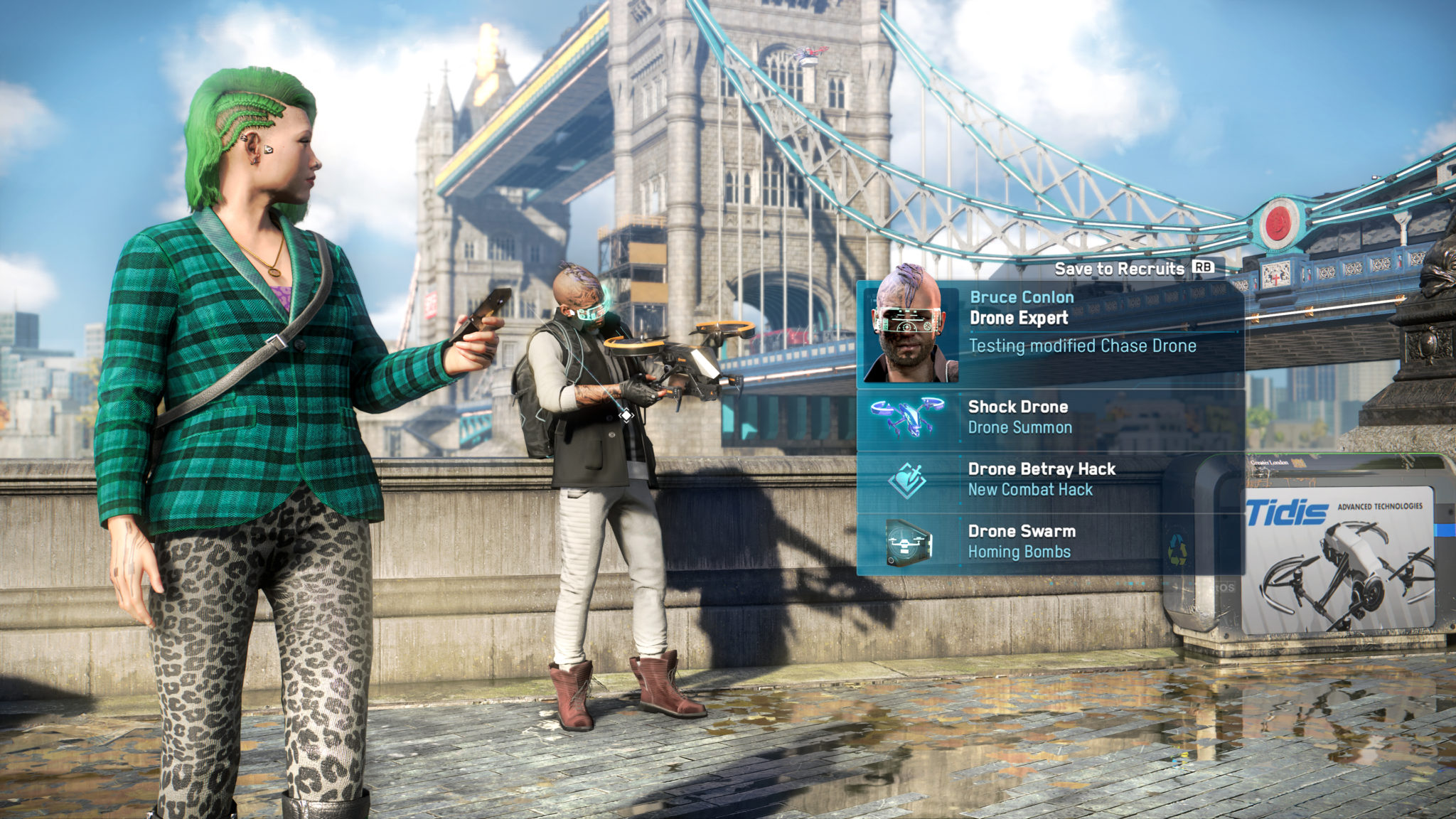 I played Legion on the Xbox Series X, and the first quarter of the game technically using the backwards compatible Xbox One X version, which looked great itself, but once the upgraded “Optimised for Series X/S” version of Legion released, it really began to shine.

RTX or ray-tracing is a hot topic at the moment in gaming, and at its core, it’s basically all about in-game reflections – namely what can you see in windows, the sides of buses, puddles etc. With RTX off, you usually see a very basic outline if anything at all, but with it on, reflections behave almost exactly as they do in real life.

Walking around a rainy Piccadilly Circus at night in Legion is genuinely breath-taking – the lights from the billboards reflect clearly in the puddles, and the headlights of passing Black Cabs light up the road almost too realistically.

The depiction and detail of London is the highlight of Legion, with each borough having its own distinct style, type of characters, and local sights and landmarks. It was the closest thing I felt like to being on holiday in this COVID-world. 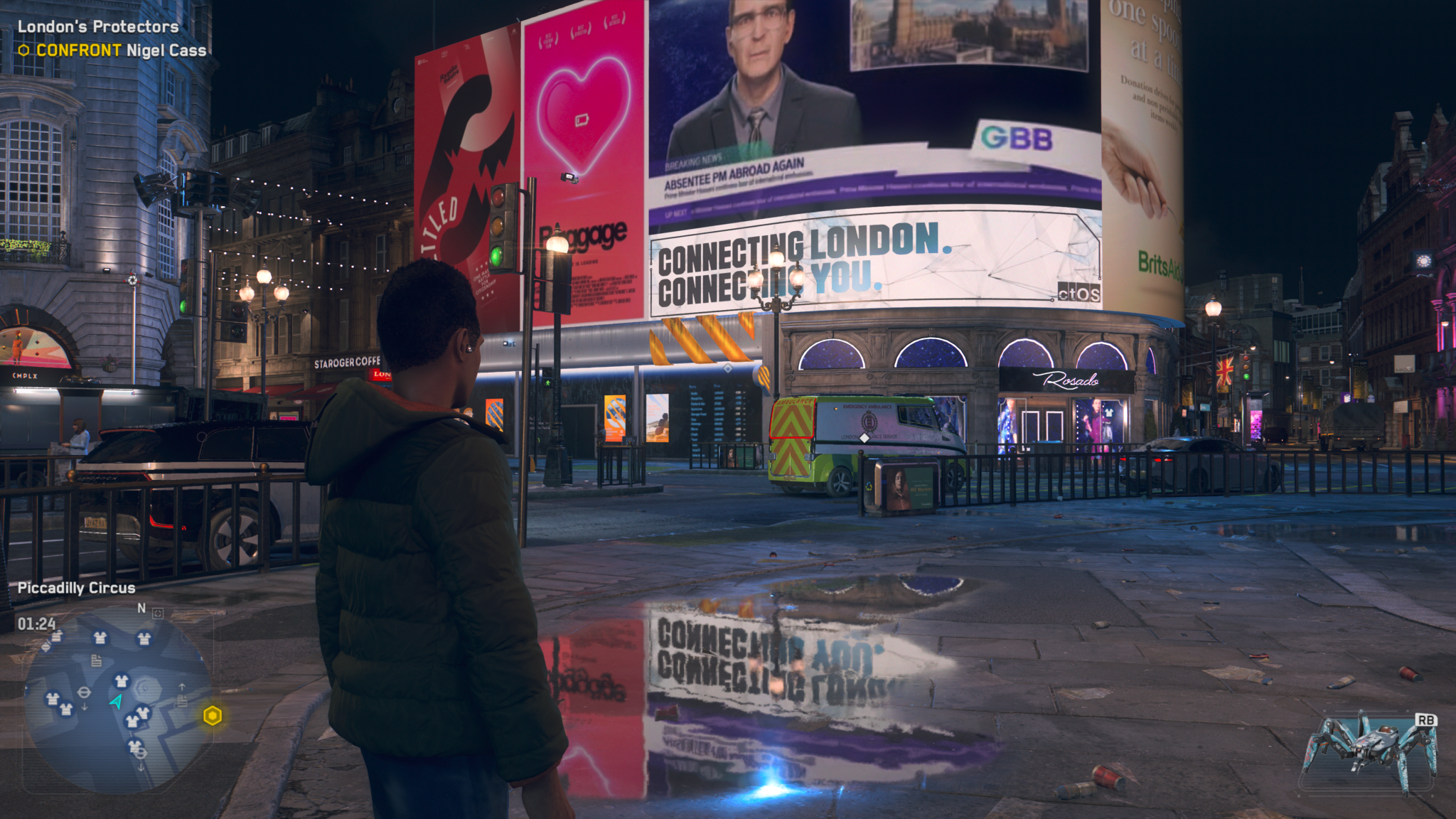 Unfortunately, up-close character models can look a little bit muddled, and the animations are not as realistic as you’d expect to find in a similar city-based game like GTA V – it looks spectacular and realistic but still feels like a game.

The game did crash on me a few times only after the optimisation upgrade, but there are stories of the game being unplayable for some others on the Series X/PS5, so hopefully it’s something Ubisoft can fix quickly with a patch.

Driving is incredibly clunky and more of a nuisance, so it’s a good thing you can quickly fast-travel to any Tube station you’ve unlocked (just by passing it once). This is a double-edged sword though, as you’ll miss a lot of the stunning scenery if you don’t drive from A to B, but the fast-travel loading times on the series X are so incredibly short that it’s too tempting not to use. 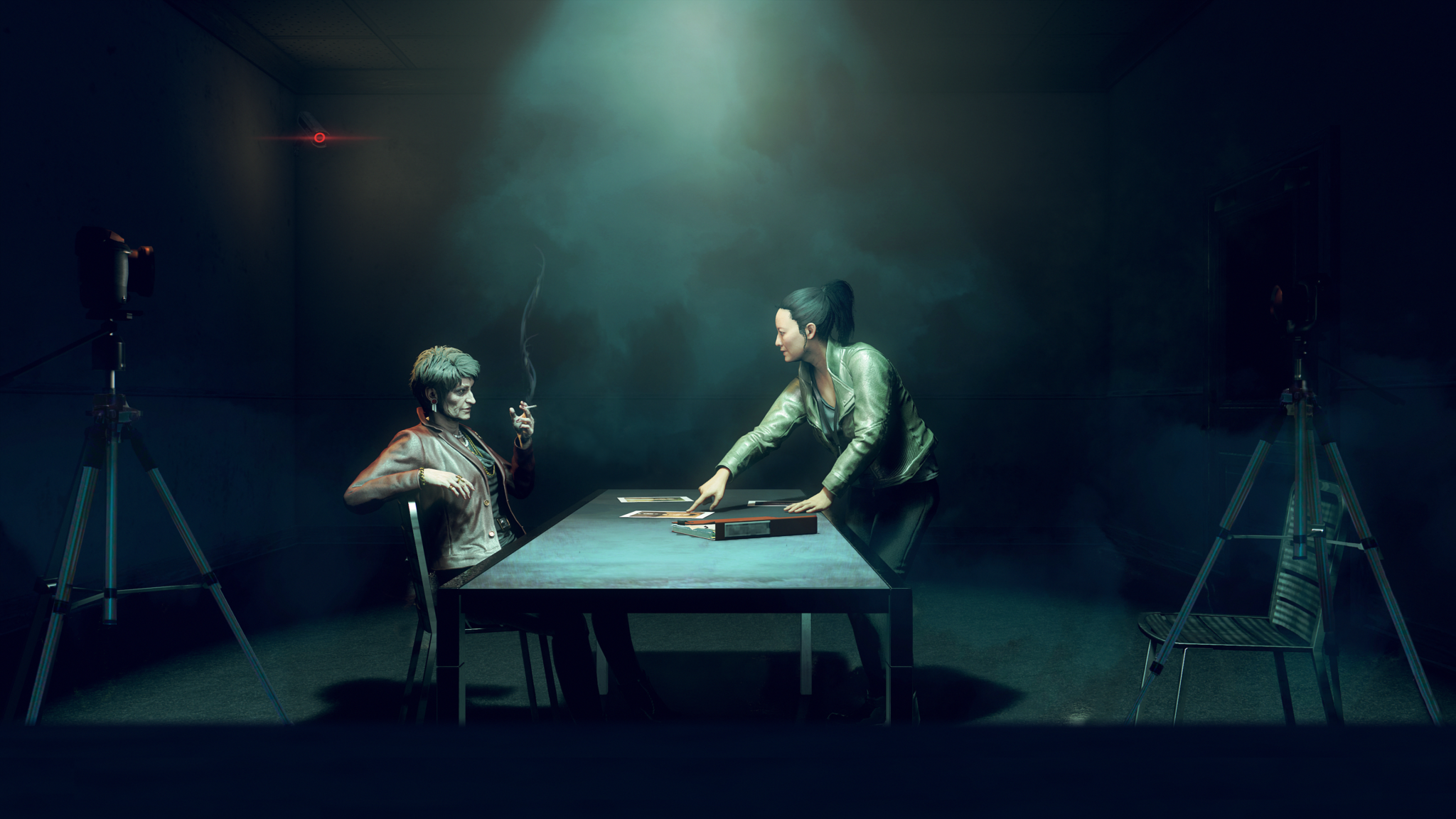 The missions are fun at first, but eventually become quite repetitive, with you usually just sneaking into an enemy hideout either on foot or using the overpowered spider drone which can climb through vents. Half of the time you simply hack a console then leave, the other half you defend a console from waves of enemies as you hack it.

Thankfully the overall story was interesting enough for me to not be too bothered by the repetitiveness, as I did want to find out who was behind the bombings and to see how the game ended, and I’m glad I did as Ubisoft have crafted a good overall story here, despite a few hiccups along the way.

And be warned that the story does go to some dark places at times. Brexit feels represented with European immigrants being held in migrant camps and deported. There are slave rings, organ harvesting, racism, and some dark cyberpunk elements regarding immortality.
Legion is firmly anti-fascist which shouldn’t need to be said in 2020, but it’s good to see.

Both previous Watch Dogs games weren’t great, and I struggled to like both of them (although 2 was an improvement on 1 to be fair), so I was quite surprised to find myself not only completing Watch Dogs: Legion, but actually Achievement-hunting and completing almost all of the side missions.

Despite it’s few rough edges, Watch Dogs: Legion feels like a proper next-gen game, and visually it definitely looks like one. The core gameplay loop is satisfying enough to overlook the repetitive missions, and the story is decent enough to cancel out the iffy voice-acting and a few annoying characters.

It turns out that futuristic London is simply a lot of fun to explore.

You Can Now Order Starbucks For Delivery On Just Eat