Earlier this year, Taylor Swift hit out at Scooter Braun for taking over the label which owned her first six albums.

In a new statement, she claims Scooter and CEO of 'Big Machine Records' Scott Borchetta have now banned her from performing her old hits at the AMA's later this month.

Now she needs help from her 85.1m followers, 'This is where I'm asking for your help.'

According to my jet lag it is one hundred o clock celsius.

The 29-year-old shares three screenshots of notes she's written in her phone on Twitter.

They read, 'It's been announced recently that the American Music Awards will be honoring me with the 'Artist of the Decade Award' at this year's ceremony.'

'I've been planning to perform a medley of my hits throughout the decade on the show.'

Taylor explains that Scott Borchetta and Scooter Braun have banned her from performing any of her old songs at the AMA's.

'They claim that would be re-recording my music before I'm allowed to next year.'

The singer makes the revelation that she's been working on a Netflix documentary.

'This isn't the way I had planned on telling you this news.'

'Netflix has created a documentary about my life for the past few years.'

'Scott and Scooter have declined the use of my older music or performance footage for this project, even though there is no mention of either of them or 'Big Machine Records' anywhere in the film.'

However, they did say they'd allow her use the music if she does two things for them:

The pop sensation has come to the realisation that she can't take them on alone.

'I feel very strongly that sharing what is happening to me could change the awareness level for other artists and potentially help them avoid a similar fate.'

'This is where I'm asking for your help.'

Had the best time playing Lover on SNL exactly the way I wrote it, on piano in a quiet moment. And a huge thank you to Lenny Pickett for playing with us on False God🎷!! Phoebe was excellent as host and @maryellenmatthewsnyc, one of my favorite photographers, is always so awesome to work with. Make sure to watch Camila next week!!

Taylor asks, 'Please let Scott Borchetta and Scooter Braun know how you feel about this.'

'Scooter also manages several artists who I really believe care about other artists and their work.'

'Please ask them for help with this - I'm hoping that maybe they can talk some sense into the men who are exercising tyrannical control over someone who just wants to play the music she wrote.'

Taylor admits she's tried to work this out with her team privately but nothing can be done.

'Right now my performance at the AMA's, the Netflix documentary and any other recorded events I am planning to play until November of 2020 are a question mark.'

'I love you guys and I thought you should know what's been going on.'

Don’t know what else to do pic.twitter.com/1uBrXwviTS

Taylor's fellow celebs have been reacting to her post on social media.

Gigi Hadid tweets, 'Scott and Scooter, you know what the right thing to do is'

'Taylor and her fans deserve to celebrate the music!!'

'Not only are we looking at an awful business move (because one would be incentivized to allow Taylor to perform her songs seeing as it would be direct to rediscovery of a catalog they currently profit off of???) but this is just mean.'

'This is punishment. This is helping to silence her from speaking about things by dangling this over her head.' 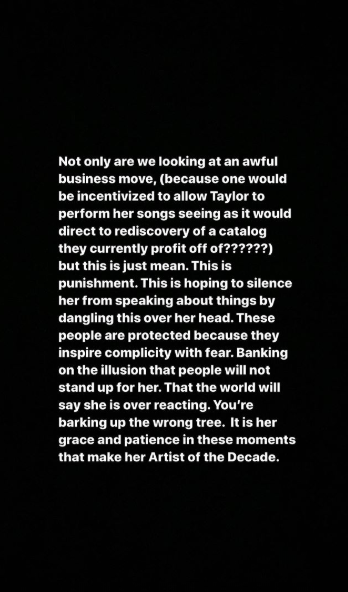 And singer Tinashe tweets, 'F**k that. We’re with you'

She follows it up with another tweet, 'It genuinely genuinely makes me sick to my stomach'