2019 Love Island contestants Belle and Anton have reportedly split up.

The news comes shortly after she posted a cryptic message on Instagram.

'Know your worth. Know the difference between what you're getting and what you deserve.' 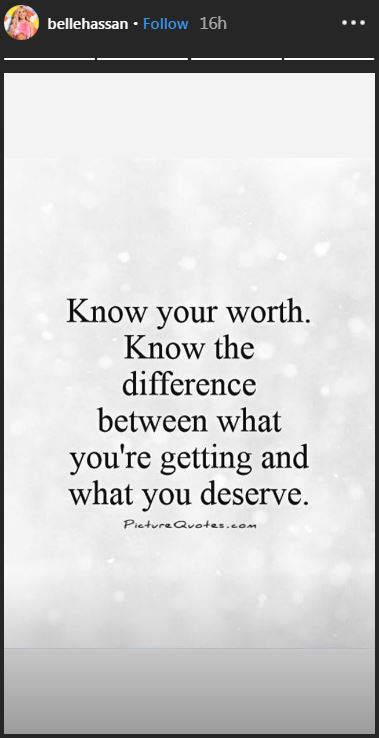 The personal trainer took off on a lads holiday to Ibiza this week.

It's believed she made the decision to walk away after seeing his Instagram Stories from the break away.

A source tells The Sun, 'Belle has seen all the pictures and videos of Anton in Ibiza and now just wants out.'

Me doing what I do best, being a feeder 😂 @anton_danyluk 💕

He was seen posing with a number of female fans and even spent one afternoon with Craig David.

'He seemed to be more excited about reuniting with Craig than speaking to her.'

The source goes on, 'She feels he’s disrespecting their relationship and can’t see him changing his ways.'

First holiday together was amazing ❤️

Anton had been unlucky in love during his time on the show.

However, that all turned around for him when Belle made her bombshell appearance during the Casa Amor shock twist.

Like every couple, they had their ups and downs but they got through it together.

Unfortunately, they were dumped from the island following a public vote near the end of the series.

The pair however, didn't allow their elimination stand in the way of their relationship.

They've continued dating on the outside and seemed even closer than ever until now.

Belle and Anton have yet to comment on reports.