It seems the pair have been hanging out a lot, and she's even featured on his social media a few times.

Speculation began when Harry shared two pictures of himself and Stassie.

He simply captioned the post, 'Wholesome,' alongside a heart face emoji.

Harry's celebrity pals have been showing them some love in the comments section.

While another wrote, 'You love to see it,' to which Harry replied with a hands up and heart emoji. 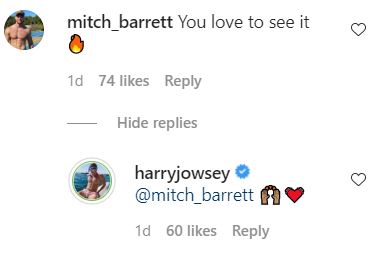 Stassie has also featured in a number of Harry's TikTok videos.

In one clip the pair dance to Fletcher's Bitter while drinking from wine glasses.

In another clip, the pair are shown dancing to Big Pun's Still Not a Player.

Some fans are absolutely loving the idea of Harry and Stassie dating, 'Okay but this would be a FIRE COUPLE'

While others are not so happy, 'Ugh he doesn’t deserve this'

This rumoured romance follows Harry's split from his Too Hot To Handle co-star Francesca Farago.

Harry Jowsey Thinks He'd Be 'So Much Fun' For Khloé Kardashian

Harry Jowsey & Francesca Farago Pretty Much Confirm They're Back Together