Plans To Replace Ball Boys with Dogs At Wimbledon Fails

Plan to replace ball boys with trained dogs at Wimbledon fails for the cutest reason.

The bid to exchange the traditional ball boy with a four-legged replacement faced a major setback when the dogs refused to give the ball back.

According to a report in The Daily Star, an attempt was made by a local tennis club to train dogs for this role.

The dogs underwent speed and agility tests at Wilton Tennis Club in London. 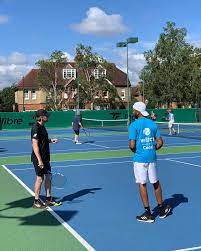 They were also trained to run up and down across the court and high jump over the nets.

However, after fetching the ball, the furry friends didn't want to give the ball back.

Martin Schiller, the coordinator of the Wilton Tennis Club, revealed the dogs were excellent at fetching the ball quickly but were not so keen on returning them.

“Our players did find themselves in a game of tug-of-war,” club coordinator Schiller said. He added, “We had a stash of treats on the sidelines to offer up as a bit of encouragement which certainly did the trick.”

They're all still good boys in our eyes!