It's all over for Maura Higgins and Curtis Pritchard

Maura Higgins has announced her split from Curtis Pritchard.

The pair met on last year's series of Love Island and even made it to the final of the show.

Happiest of birthdays to my handsome man @curtispritchard12

Taking to Instagram Stories, Maura writes, 'Curtis and I have made the decision to separate.'

'We enjoyed a great experience from our time in the villa and want to thank everyone for supporting our relationship.'

The best nights are the ones spent with you❤️

She goes on, 'There is no easy way to get through a breakup and no bad feeling on either side.' 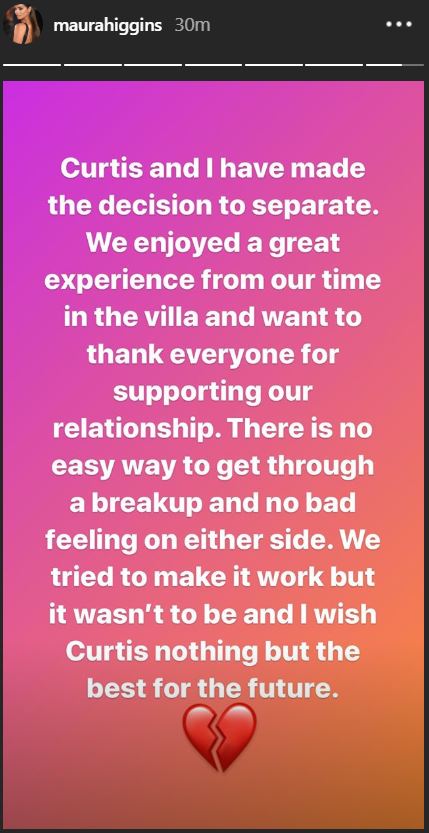 The pair met on last year's series of Love Island and made it all the way to the final.

Curtis had originally been coupled up with Amy in the villa.

However, it wasn't long before they called off their exclusive coupling.

#repost @amyhartxo ・・・ Couple GOALS! Tag your bae Also tell us what their couple name should be! #teamamz #loveisland2019

Maura had been in a few different couples at this stage but hadn't found anyone she truly connected with.

When Amy and Curtis split, she told him she had feelings for him.

This came as a surprise to pretty much everyone.

Thanks to everyone that saved and voted for @maurahiggins and @curtispritchard12! The support and love is overwhelming and we couldn’t be more grateful for it! ❤️ final dates start tonight! What do you think would be the perfect date for them? #loveisland #maurtis #teamcurtis @loveisland

Just as Curtis and Maura were getting to know each other on a deeper level, new girl Francesca made an entrance.

The dancer wanted to keep seeing Maura while also getting to know Francesca.

Thanks again everyone! Can’t wait to get these guys back! What’s everyone doing tonight at 9pm? ‍♂️

Curtis and Maura re-coupled and despite their many disagreements, they stuck it out 'til the end.

The couple came in fourth place on the series.

Chris Taylor Shares Adorable How It Started, How It's Going Post With Maura Higgins