It turns out she was also a contestant on Britain's Got Talent when she was 14.

'Lewis was gutted. He really loved her.' 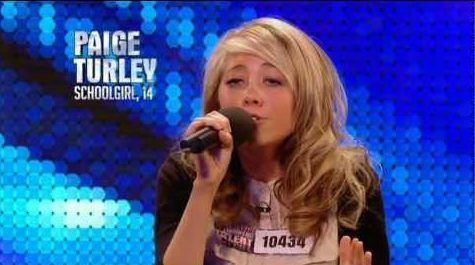 Friends of the hit-maker tell The Sun that they dated for about a year in college.

'She’s the girl. The song and his album is clearly inspired by love and he loved her — he really did.'

'They were on and off and together just over a year.'

'It’s funny that his songs now mean so much to so many. But the real story behind it is boy meets girl.'

'She must be thrilled she helped inspire such beautiful music.'

According to the outlet, Lewis previously referenced a former flame as the inspiration for his music.

'I met a lady. She was very nice. I loved her. I loved the look of her and I loved how she spoke.'

'We dated for a year and a half then she left me.'

'Then I wrote an album about it and I still think about it every day.'

The singer appeared on Britain's Got Talent as a contestant in 2012.

She performed Bon Iver’s Skinny Love and impressed the likes of Simon Cowell.

A source tell the outlet, 'She’s a great singer in her own right.'

The source reveals Paige has even, 'played at Glasgow’s Hydro.'

'She’s always gigging. Lewis' people should snap her up and put her on the same bill.'