He announced the news in the caption of a picture he shared of the newborn online. 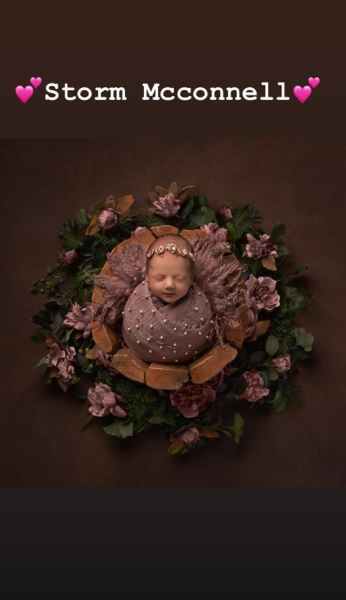 The reality star also shared a bunch of adorable snaps from a family photoshoot.

In the first picture, his partner Katie McCreath is seen cradling Storm as Jeremy wraps his arms around them.

'Feeling complete, our home has grown by two feet.'

And it looks like Jeremy hasn't forgotten his best friend.

He also had a professional photo taken of himself and his dog Patsy.

'here is a sneak peak of me with my original princess ...Patsy...'

The happy couple announced the birth of their baby girl late last month.

Jeremy is already a dad to one year old Caben Ali.

He had his son in January 2017 with his partner at the time Stephanie Davis.

Jeremy and Katie have been dating for just under two years.

Katie is a solicitor and the pair met when she supported him during his arrest for assault on Stephanie Davis also in 2017.

They announced their pregnancy news in July.