Chrishell Stause is fuming at one of her Selling Sunset co-stars, but we don't know which one.

She went on an Instagram Stories rant about a certain someone, 'willing to throw anyone under the bus to get that 15mins,' of camera time.

The real estate agent wrote, 'The thirst for camera time on season 6 is REAL.'

'Wow. That was insanity. But also SO transparent.'

'Get your 15 mins girl but leave my business out of it,' she concluded the first post.

In her second post, Chrishell wrote, 'Screenshots have been archived for this very moment.'

'Of COURSE you have a huge issue with me now—not before—when you have a camera crew around you.'

'I hate fake [poop emoji]. If you want camera time—JUST SAY THAT. I would have helped you get the right angle.'

'But don't try to come for people I love or my business when you were added and I was there to hype you up, excited for you.'

'You guys are smart,' she addressed her followers and the Selling Sunset fanbase.

'I think you will see who is need of attention & willing to throw anyone under the bus to get that 15 mins.' 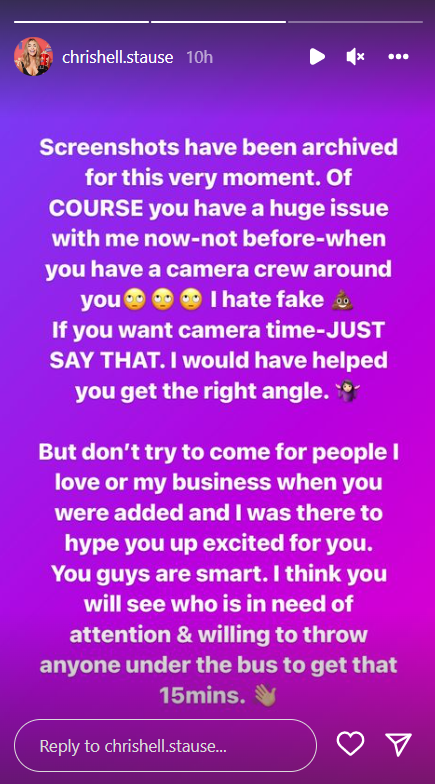 Chrishell Stause Explains Her Sexuality To Confused Fans On Instagram