Adam Levine has come under fire after model Sumner Stroh alleged she had an affair with the married Maroon 5 front-man.

After he released a statement addressing the claims, fellow Hollywood celebs including Chrishell Stause and Emily Ratajkowski weighed in on the drama.

In case you missed it, Sumner released a video on TikTok alleging she'd had an affair with Adam.

The singer is currently expecting his third child with wife Behati Prinsloo.

Sumner told her followers, "At the time, I was young, I was naïve and quite frankly I feel exploited."

"I wasn't in the scene like I am now, so I was definitely easily manipulated."

A little later in the video, the model shared a screenshot of a text exchange, supposedly between her and Adam.

Sumner claimed they were seeing each other for about a year before she stopped talking to him.

Over summer, he purportedly slid back into her DMs to say, 'OK serious question. I'm having another baby and if it's [a] boy I really wanna name it Sumner.'

'You ok with that? DEAD serious.'

@sumnerstroh embarrassed I was involved w a man with this utter lack of remorse and respect. #greenscreen ♬ original sound - Sumner Stroh

Sumner said she never wanted to come forward with this story, but was forced to after, "recklessly," sending screenshots to friends she thought she could trust.

She explained, "One of them had attempted to sell to a tabloid."

In a follow-up video, she insisted she thought Adam and Behati's marriage was over when they were together, and apologised for, "the role [she] played in this."

The artist has since released a statement on Instagram.

He wrote, 'A lot is being said about me right now and I want to clear the air.'

'I used poor judgment in speaking with anyone other than my wife in ANY kind of flirtatious manner.'

Adam continued, 'I did not have an affair, nevertheless, I crossed the line during a regrettable period of my life.'

'In certain instances it became inappropriate; I have addressed that and taken proactive steps to remedy this with my family.'

'My wife and my family is all I care about in this world.'

'To be this naïve and stupid enough to risk the only thing that truly matters to me was the greatest mistake I could ever make.'

'I will never make it again. I take full responsibility.' 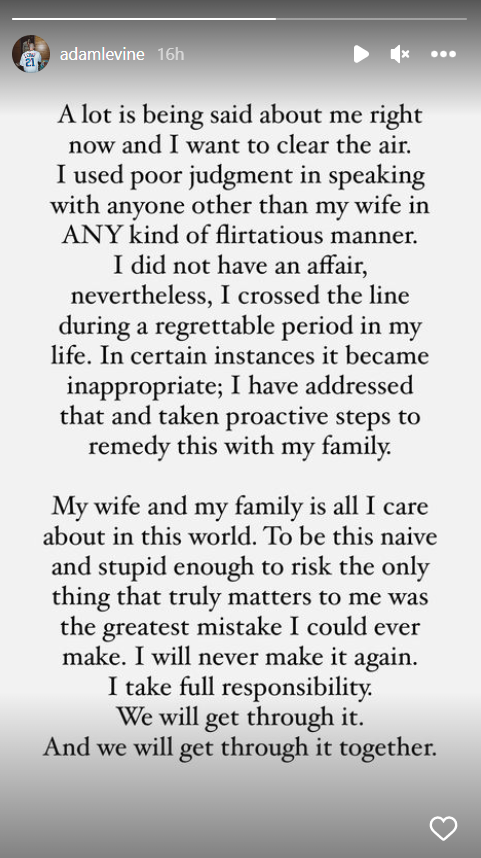 Some Hollywood celebs have been seemingly weighing in on the drama, including Selling Sunset's Chrishell Stause.

She tweeted, 'When apologizing for cheating publicly I hate the -we will get through it together part from a man.'

When apologizing for cheating publicly I hate the -we will get through it together part from a man.

While Emily Ratajkowkski shared her belief that summer is a victim in all this.

Sara said, "We don't feel sorry for you. You knew this man was married and you participated."

In a video response, Emily said, "I think a huge problem in our culture right now is that we just say, 'Oh, men are monsters, they’re terrible, they’re horrible.'"

"We don’t hold them accountable and then we blame other women."

"We ask women to adjust their behavior instead of just saying men need to change their behavior. It’s sexism. It’s classic misogyny."