A Dublin City councillor says Gardai need to crack down on the use of scramblers after two collisions in just over a week.

Four people are in hospital after the crash between a bike and a car on Decies Road in Ballyfermot yesterday evening.

Last week a toddler was seriously injured in a collision involving a scrambler nearby at Cherry Orchard Park. 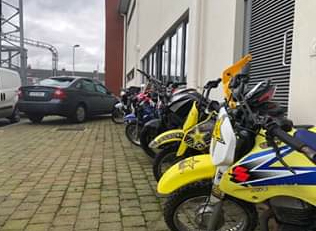 Cllr Daithi Doolan says people trying to go about their normal lives are being tormented by those on the bikes:

"The sad thing about last night, when we had four people ending up in hospital, one of them was a totally innocent bystander."

"I believe he was working for a local takeaway and when he was reversing out onto the road he got hit straight on by three lads on a scrambler."

"People are terrorised on the streets now because of these scramblers."

"They have no sense of safety"