Donald Trump Threatens To Use Army To Stop Anti-Racism Protests

Donald Trump has threatened to deploy the army to stop anti-racism protests across America.

The US President has describing them as "domestic terror", after another night of violence.

He addressed the nation from the White House, as police used stun grenades and tear gas to clear nearby.

However, his message to state leaders to restore 'law and order' in their areas hasn't been met with full agreement.

One of those speaking out was New York Governer Andrew Cuomo

The president is calling out the American military against American citizens.

He used the military to push out a peaceful protest so he could have a photo op at a church.

It's all just a reality TV show for this president.

Meanwhile, other political rivals have compared the move to that of a dictator.

One example is from Senator, and potential Vice Presidential nominee Kamala Harris:

Shortly after his speech, he walked to a church and posed for a photo with the Bible.

For our children, for the very soul of our country, we must defeat him. But I mean it when I say this: we can only do it together. https://t.co/G1yE67q9Nz

It was the sixth day of disturbances sparked by the death of an unarmed black man - George Floyd - in Minneapolis.

A police officer was filmed pinning Mr Floyd down with his knee on the back of his neck as he begged for his life.

The policeman who was filmed with his knee on Mr Floyd's neck - Derek Chauvin - was been charged with third-degree murder and manslaughter.

Yesterday in Dublin, thousands turned up for a rally from O'Connell Street towards the American Embassy 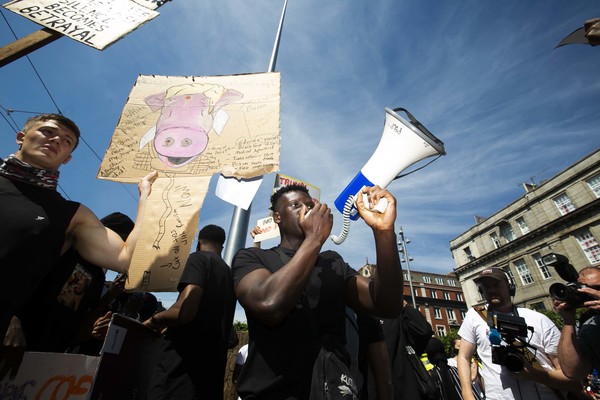 The protest in Dublin was one of many to take place, with most in the US.

Many have passed peacefully, with police joining the protesters in solidarity in some cases.

However, some have been marred by clashes between protesters and police, such as the one in Washington DC yesterday.

In addition, it has led to Donald Trump referring to protesters as 'thugs', drawing anger from many Americans, with other voices on Twitter showing support.

'United' States it is not.

CNN Reporter Has Been Banned From The White House