WATCH: Francesca Farago Gets Emotional As She Announces Split From Harry Jowsey

Too Hot To Handle's Francesca Farago and Harry Jowsey have called it quits.

She announced the news in a very emotional YouTube video yesterday, revealing he's the one who ended things.

All I want for my birthday today

The reality star told her followers that he broke up with her, "because he couldn't do long-distance anymore."

She admitted, "I obviously was heartbroken. I did everything I could."

Francesca lives in Vancouver while Harry, originally from Australia, is currently living in L.A.

She said she wanted to announce their split after this but he asked if they could wait a little longer.

The reason being, he didn't want to validate certain, "rumours and accusations," going around about him at the time.

Francesca admitted she didn't even want to tell her friends because she was convinced they, "were going to figure it out."

She said, "We would argue every now and then, but it was never for me relationship ending."

"And I think for him, small, little things ended up turning into relationship ending arguments."

3 million you blow my mind, wish I could give you all a big kiss right now love you all so much

Rumours that turned out to be true

Francesca later admitted, "There was a lot of rumors that came up that turned out to be true."

She said, "I was getting sent a lot of screenshots and messages."

"I didn't want to believe it because how could you have a wedding ring folder with someone, and how could you propose to someone, but you're also saying I can't be with you because of the distance. It makes me feel like I was being played."

Where should we have the wedding

"For me," Francesca said, "I would have stuck by this person no matter what."

"Through all the fights and everything I would have never given up, but it wasn't reciprocated."

"He was moving on, and he is moving on and I need to do the same."

In the video's YouTube description, she apologised for the inappropriate timing.

She said, 'With everything going on right now I do not wish to come across as insensitive, by airing out my personal issues.'

However, she said she feels the need, 'to be honest.'

Later in the description, Francesca told her followers, 'never let anyone treat you poorly, in any situation.'

'You are all amazing and you all deserve the WORLD.'

'Always stand by people you love, but not if it comes at the expense of your own happiness.'

She began to finish up, 'I really need to start moving forward with my life.'

'If it comes down to me having to release more of the truth I will when the time is right.'

Watch the full announcement video below:

Taking to Instagram Stories, Harry admitted, "This is a sh*t situation and only myself and Francesca know the full extent of what's happened." 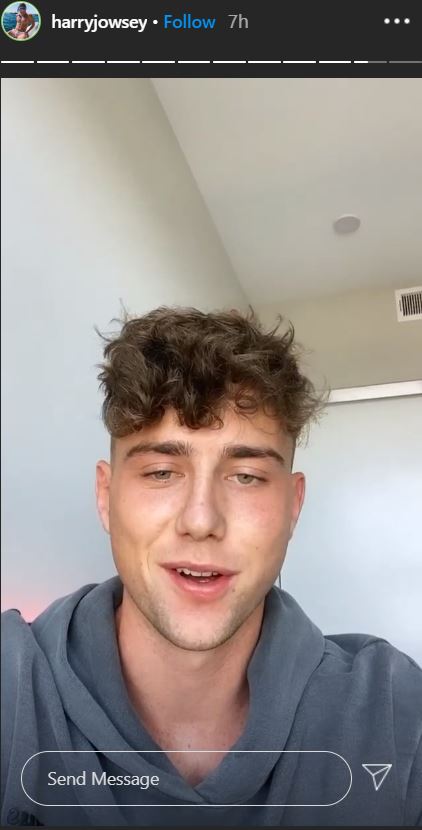 The reality star said, "Francesca knows I'm always gonna love her, she's always got my heart in a special place with me..."

Back when I had no hand tattoos and didn’t make any bad decisions Getting warmer here in LA, who wants to come for a swim

Cover photo via Netflix Too Hot To Handle

Too Hot To Handle's Harry & Francesca Are Engaged