Khloe and Malika have taken to Instagram following the news that Tristan cheated with Jordyn Woods.

The best friends commented under a video shared by Hollywood Unlocked.

In the video, CEO of the Hollywood Unlocked Jason Lee confirms the cheating story.

'It is true. You know why? 'Cause one of my writers was there... That happened. That's a fact.'

#PressPlay One of our contributors was at #TristanThompson’s house party and saw what went down! @kyliejenner we need you to address some thangs with @jordynwoods 😤 Anyhow, #JordynWoods stayed at his house until approximately 7am. Who needs to go?! Comment below!

Khloe and Malika then left comments underneath the post.

Malika's message could be interpreted as a response to Tristan's tweeted and deleted 'FAKE NEWS' comment. 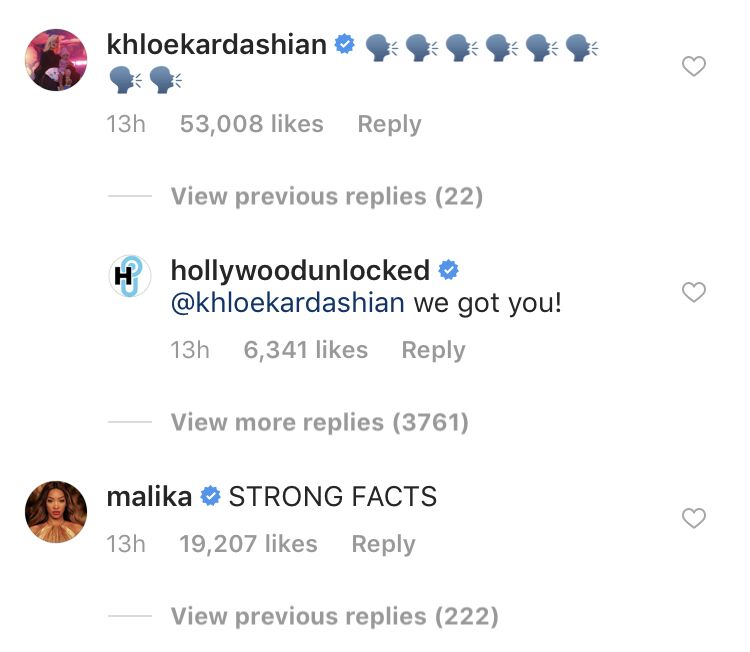 Khloe and Malika were not the only two celebs to engage with the post.

Larsa Pippen posted 'Amen!!!' to which Perez Hilton responded, 'These comments are lit!!'

Hollywood Unlocked called out TMZ for stealing their story

CEO of Hollywood Unlocked Jason Lee has since shared a second video.

In the post he calls out TMZ for stealing his 'exclusive.'

'I've let you mother f****ers steal from me in the past but it stops today.'

'I'm the one who reached out to Khloe Kardashian to tell her that her baby daddy was cheating with Jordyn.'

'TMZ you're this big old monstrous company yet you're putting out my exclusive, Hollywood Unlocked's exclusive as if it was yours'

Yo @tmz_tv we not playing today. Tell Harvey to call me!

'Everytime you steal TMZ, I'm going to let you know.'

'Ask Khloe who told her. It was me'

E! News are reporting that Khloe is in complete 'disbelief' over the news.

Jordyn Woods Hits Back Following Reports Her Boyfriend Cheated On Her