Pictures emerged this week of Dani moving on with her ex boyfriend Sammy Kimmence.

A spokesperson opened up to The Sun on behalf of the star.

Unreal day at Cheltenham my first ever time at the races even got a couple of winners! They told me it was beginners luck 🙄🐎 . Thanks @primark.MAN for kitting me out the jacket and trousers fit SICK! Was well happy. #PrimarkMan #ad

In photos released earlier this week, Dani can be seen passionately kissing her ex boyfriend.

This comes just 20 days after her split from Jack Fincham.

A spokesperson for Fincham told the publication, 'Jack was of course very upset.'

However, it seems Jack isn't letting it get the better of him.

The source continues, 'He is keeping his head high and focusing on work at the moment.'

The star has since deleted all evidence of a relationship with Dani from Instagram.

In photographs emerged this week, Dani can be seen cosying up to her ex Sammy Kimmence on the streets of London.

Onlookers told the publication, 'Dani and Sammy were drinking and having a great time.'

The source says they, 'made no secret of being back together.'

The pair dated for a year before Dani entered the villa last Summer.

'Dani couldn’t keep her hands off him and the feeling was clearly totally mutual.'

'They kissed for ages before heading off as a group...'

It’s been confirmed that the man Dani was kissing, Sammy Kimmence, is her ex that she got back together with. A friend said, ‘They were together for about a year, but she never really got over him and they got back in touch quite quickly once she split from Jack.’

However, it seems Sammy was spotted holding, 'a small sachet of a white or grey powder.'

'It was hard to say what was in the bag but it’s not a good look.'

He may be keeping his head high at the moment but it didn't stop him from making a subtle dig at his ex on Instagram.

Fincham shared a picture of himself holding a bag in his right hand.

He captioned the post, 'Bag in my hand again... it’s helpful.'

Many believe this was a reference to the sachet spotted in Sammy's hands.

According to the publication, Jack said that the picture had nothing to do with Dani's ex.

'It’s nothing to do with that at all it was about a comment someone made ages ago saying why do I carry it and I said because it’s helpful.'

However, his Love Island co-stars and friends seem to think it's a dig.

While Sam Bird wrote, 'Nothing to see here.' 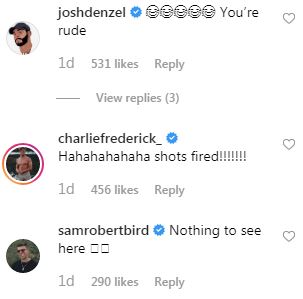