Love Island 2018 winner Dani Dyer has been gushing over her new boyfriend Sammy on social media.

The pair were spotted packing on the PDA just days after her split from Jack Fincham, and it looks like they're still going strong.

Dyer shared a photo to Instagram Stories yesterday of the new couple on a beach.

She captioned the picture with three heart emojis. 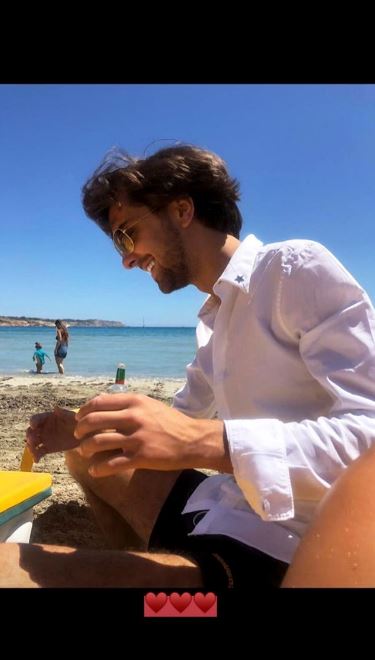 Dani commented back with, 'Only person I know to wear a shirt on the beach.'

Just days before their cute beach day, Kimmence shared a photo confirming his relationship with Dani.

In the picture he swings his arm around her shoulder as they pose for the camera.

They were been spotted kissing just 20 days after Dani' split from Jack.

It’s been confirmed that the man Dani was kissing, Sammy Kimmence, is her ex that she got back together with. A friend said, ‘They were together for about a year, but she never really got over him and they got back in touch quite quickly once she split from Jack.’

Onlookers told The Sun at the time, 'Dani and Sammy were drinking and having a great time.'

They reportedly, 'made no secret of being back together.'

'Dani couldn’t keep her hands off him and the feeling was clearly totally mutual.'

Following the news of Dani's new romance, a spokesperson for Jack told The Sun, 'Jack was of course very upset.'

Jack has since deleted all evidence of a relationship with Dani from his Instagram.